“Murder In The Front Row: The San Francisco Bay Area Thrash Metal Story” will premiere on Saturday, April 20 at AMC Kabuki 8 in San Francisco, California at 1 p.m. Directed by Adam Dubin (BEASTIE BOYS‘ “Fight For Your Right to Party”, “No Sleep ’til Brooklyn”), the film contains over fifty interviews with various metal stalwarts, (including METALLICA, MEGADETH, SLAYER, ANTHRAX, EXODUS, TESTAMENT and DEATH ANGEL), telling its tall tales through a mix of first-person interviews, animation and narration by comedian Brian Posehn.

“These are just good stories, and they are very human stories,” says Dubin. Narratively, ‘Murder In The Front Row’ follows the story of a group of young kids in Northern California with a shared passion for heavy rock bands like UFO, IRON MAIDEN and MOTÖRHEAD. “All these bands were mainly from England, and they never really toured the West Coast,” says Dubin. “So these young people started creating their own music, starting their own fanzines, booking clubs and trading tapes. These were people who were adamant about music and the bands, but also each other.”

The documentary is loosely based on a 2012 photo journal of the same name by Harald Oimoen and Brian Lew. “What I loved about the book is that it wasn’t just about METALLICA,” says Dubin. “It was documenting a vibrant scene, where all the bands were equal and there was real camaraderie. The photos captured the sweat of the clubs, the ringing in your ears and the power of young people. Harald and Brian captured the humanity of it, and they understood that I was somebody who could bring that out in a film.”

Another strength of the film is shedding light on bands who never hit the heights of METALLICA but certainly cast a wide influence — thrash forefathers EXODUS in particular. “There’s a ‘Big Four’ of metal that should really be a ‘Big Five’ and include EXODUS,” says Dubin. “I particularly think the movie will inspire viewers to re-evaluate the contributions of Kirk Hammett, who founded EXODUS in the Bay Area three years before METALLICA came to town. Kirk was the central mover who put the band together, guided the music and found frontman wild man Paul Baloff.”

A veteran music and comedy documentarian, Dubin is an ideal match for the film’s subject matter. The New York native and NYU graduate (where he roomed with mega-producer Rick Rubin) has directed a number of documentaries for METALLICA over the years, including their multi-platinum “A Year And A Half In The Life Of Metallica Parts 1 & 2”, “Hit The Lights: The Making Of Metallica Through The Never” and “Freeze ‘Em All: Metallica In Antarctica”, along with the band’s music video for “Nothing Else Matters”.

That said, the film isn’t bogged down by music minutiae. Dubin, who’s directed comedy specials for the likes of Lewis Black and Jim Breuer, brings a lightness to the proceedings. “There are lot of similarities between music and comedy; comedy has a musical timing and a rhythm,” he says. “And there are a lot of laughs in this movie. I leaned into that. This isn’t ‘Some Kind Of Monster’ — I wasn’t looking for drama.” (One story in particular to watch: A Bill Graham scolding of James Hetfield after a 1985 dressing room trashing.)

The film premiere will be followed by a performance from METAL ALLEGIANCE, the final stop on their fifth-anniversary tour. METAL ALLEGIANCE is Alex Skolnick (TESTAMENT), Mike Portnoy (DREAM THEATER), David Ellefson (MEGADETH) and Mark Menghi along with a multitude of metal legends, playing sets that mix in original songs with classic covers. The performance on Saturday, April 20 at The Fillmore will also feature Gary Holt of EXODUS/SLAYER and other very special guests.

On a personal level, Dubin thinks “Murder In The Front Row” serves as a natural evolution for him as a filmmaker and storyteller. “If there’s one theme that runs through all my work, from the BEASTIE BOYS to METALLICA to ‘Murder In The First Row’, it’s all an attempt to reveal a central truth of rock ‘n’ roll,” he says. 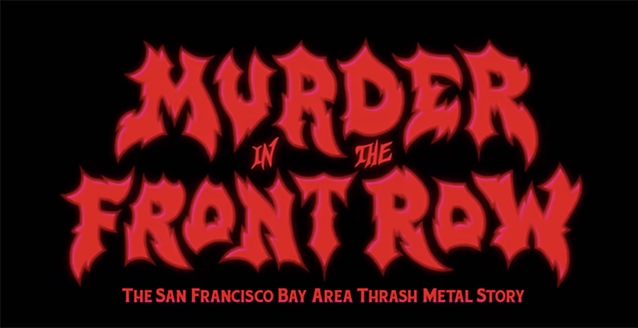