Below you can read a statement written by HAVOK frontman David Sanchez explaining his and the band’s side on disagreements between HAVOK and Mustaine Management.

Also, you can read a copy of the management agreement offered by Mustaine Management to HAVOK, which band called “unacceptable” and turned it down.

Here is the HAVOK‘s statement:

Many comments have been articulated in the few last days that should be responded to.  Dave Mustaine uses names like “liar” – not to be taken lightly by anyone.

It’s time to get the story straight and let the truth be known, so we can move on beyond name-calling and petty arguments.

“If you tell the truth, you don’t have to remember anything.” -  Mark Twain

Mr. Mustaine’s claim is fallacious.  Havok has been completely honest in its representations – and has the evidence to prove every single point touched on in its original press release. We would like to clear the air and inform the Metal Community of what the facts are – 100% rumor-free.

The truth is on our side, so we have no fear…

The most unfortunate part of this situation is that music-lovers are the ones being cheated.  Fans were promised a product in order to induce them to purchase a ticket; and now the product has been modified by Mustaine Management’s decision to remove Havok from the upcoming Megadeth shows.

Havok, in association with Mustaine Management from April 2015 – August 2016, was just tossed from the tour by Mustaine.  Justis Mustaine is our main contact there, but Justis went out of his way to make sure that we knew: “Mustaine Management is operated by myself and Dave Mustaine”.

We wouldn’t want to be accused of “gossip-mongering” again, so let’s get straight to the heart of the matter…  We directly address the accusation that we “stiffed Justis for thousands of dollars” and that Justis was “compensated poorly” for his work as follows:

When we first began working with Justis Mustaine, he agreed to “suffer when the band suffers” and not take exorbitant amounts of the band’s revenues whenever the band did not generate large cash flows. The expenses of touring are very high and when your guarantee is not in the thousands, it is difficult to push a profit from any tour. After our last European tour, Justis agreed to take reduced pay and still grossed revenue more than the members of the band realized. If he had not taken the percentage reduction, he would have been paid more than double what the band members were paid. So, to be clear – Justis agreed to take a pay cut and everyone was happy – or so we thought until his latest rant.

Many people in the industry seem to forget that the band is the boss and the manager works FOR the band, not the other way around.

Shortly after returning home, we sought new legal representation and began negotiating in earnest, the terms of a prospective management agreement.  Dave Mustaine has stated that we: “had 5 months to sign an industry standard contract.”  As it is August 2016 now and the contract is dated May 16, 2016, Mr. Mustaine’s assertion is patently false.

After you read it we ask you to ask yourself: Is this a contract that any established band would sign? After glancing at the contract, I am sure people noticed that our band’s name was misspelled multiple times. I don’t know who the band “Havoc” is, but I bet they’re pretty good if Mustaine is also offering them such a deal! I am convinced that Mustaine Management never read the contract that their lawyer sent to us – otherwise they probably would’ve caught these five important typos. I guess you could say, “Spelling Ain’t Their Business…”

This contract does not specify precisely what the management company is obligated to do – if anything (with the exception of “advise and counsel” us) but it sure does demand a lot from the band. Toward the bottom of the proposed contract, just above the lines where one would sign, the closing says, “Very truly yours,” – How fitting, since if we would’ve signed this contract version, we literally would be “theirs”.

If this contract represents the industry standard, then we want nothing to do with the industry.

Let’s be crystal clear: The Megadeth show contracts and this proposed management contract are TWO COMPLETELY SEPARATE THINGS.  One does not have anything to do with the other, but Mustaine Management decided to breach their oral agreement, then unilaterally merge these separate matters into one conditional (“pay to play”) offer. We couldn’t agree on the new proposed management contract, so they removed us from the shows – which they already contracted with you and us for our performance.

The only remaining question some people have asked us is: “Why didn’t Havok counter the offer?” Well, in fact we did… we sent our proposed version of a management agreement over on August 9, 2016, but by that time, Mustaine had already pulled the trigger.  By the time we were all able to come to agreeable terms within the band to counter Mustaine Management’s initial offer, we had already been pulled off of the tour dates.

This came as quite a surprise since Justis previously told us via email that, “This contract has to be back before the September show”. Usually in a negotiation, one party starts out with a proposal, then the other side counters, and if they are negotiating in good faith – they work it out to meet somewhere in the middle. Mustaine took the hard line.

Mustaine Management’s strong-arm tactic is their own decision. As anyone could imagine, it takes time to work out an agreeable contract in which every party feels like they’re getting a fair deal. Unfortunately, Mustaine Management was not willing to negotiate and in turn, removed us from Megadeth shows as a way of punishing us – and ultimately you – the customer.

These revelations are harsh, but the truth is the truth.  We simply want to end casual speculation and get the entire story out to the people that count – you the FANS. We have no desire to drag things out any longer. We do not wish to have a feud or grudge with the Mustaines.  Dave Mustaine is a nice, funny, smart guy (and so is Justis). We hold nothing against them personally and are extremely grateful for the opportunities they have presented us. It was a pleasure to share the stage with Megadeth and get to know the guys in the band. Megadeth and their crew treated us very well on tour and it will not ever be forgotten. Dave Mustaine went out of his way to extend our set times, give us bottles of his delicious wine, offer us great advice, and we would all like to thank him for that – once again.

The manner in which Mustaine Management chose to remove us from the tour dates was a brazen act. While it is well-known that Dave has a short fuse, none of us will hold that against him. Holding a grudge does no good and causes unnecessary stress.  We hope that Dave does not hold a grudge over our separation, we want him to be happy in life for doing good – not harm.

The age-old question that should be remembered here:

“What would Jesus do?”

I still love Megadeth’s music and always will. Without Megadeth, Havok would not sound the same; they were a huge influence on the formation of this band. Throughout the years, Dave Mustaine has inspired me to never give up and to keep going, despite lineup changes. I truly do respect the man and I hope that he can feel the same.

We wish the Mustaines nothing but the best and would like to encourage fans to not bash the family or the band.  Hate breeds nothing good. We want our fans to know that we do not feel malicious. I am sure that we will cross paths with Megadeth again, so there is no reason to harbor bad blood. We wanted to clear the air and move on because life is too short to waste energy on pointless mudslinging contests.

We hope this clears things up and will put an end to the fans’ countless questions.  Again, I would like to make clear that we have factual evidence of everything that has been stated here and that we can prove any point that has been made in this release. “The truth shall set you free”.

Keep an eye out for fresh news about the new Havok record release and we’ll see you on the road soon!  Remember to think for yourself, support music, and be kind to one another. The world can be a much better place. Onward and upward!

Peace be with you… And also with you,

And the management contract: 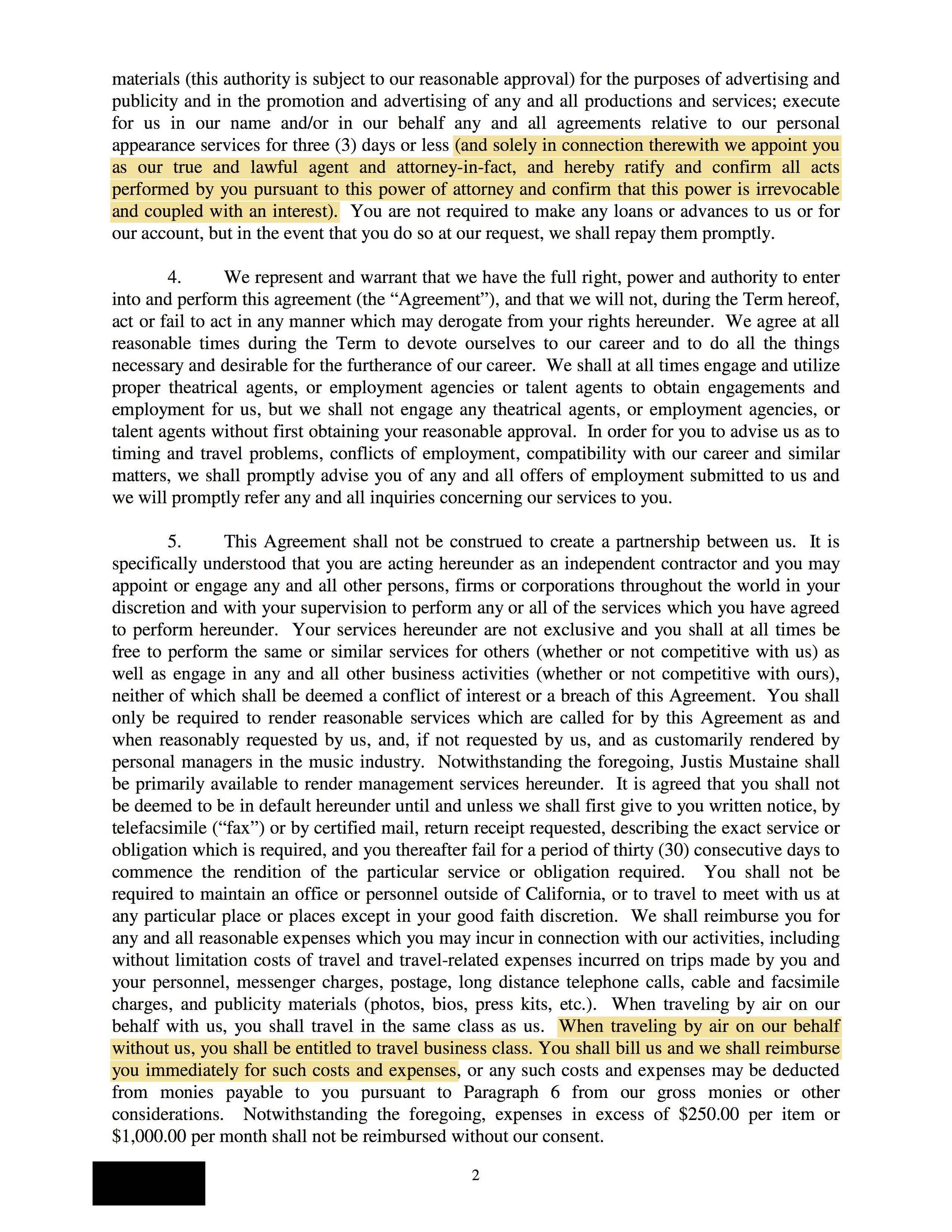