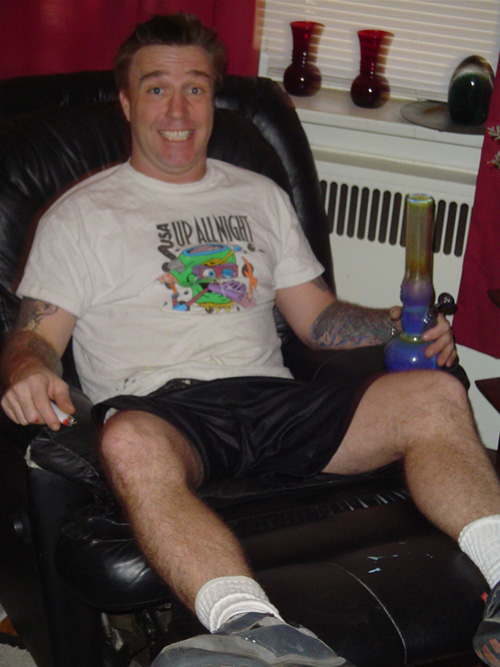 “It is with a saddened heart that I confirm my dear friend Dave Brockie, artist, musician, and lead singer of GWAR, passed away at approximately 6:50 p.m. EST Sunday, March 23, 2014. His body was found Sunday by his bandmate at his home in Richmond, Virginia. Richmond authorities have confirmed his death and next of kin has been notified. A full autopsy will be performed. He was 50 years old, born August 30, 1963.

“My main focus right now is to look after my bandmates and his family.

“More information regarding his death shall be released as the details are confirmed.”

The original article follows below.

“At approximately 6:53 p.m. on Sunday, Richmond Police were called to a residence in the 4800 block of West Seminary Avenue for a report of a deceased individual,” a Richmond Police spokeswoman said in a statement. “When officers arrived, they found David M. Brockie, 50, deceased inside the home. Detectives do not suspect foul play at this time and the Medical Examiner’s Office will determine cause of death.”

“Dave was one of the funniest, smartest, most creative and energetic persons I’ve known,” former GWAR bassist Mike Bishop told Style Weekly. “He was brash sometimes, always crass, irreverent, he was hilarious in every way. But he was also deeply intelligent and interested in life, history, politics and art. His penchant for scatological humors belied a lucid wit. He was a criminally underrated lyricist and hard rock vocalist, one of the best, ever! A great frontman, a great painter, writer, he was also a hell of a bass guitarist. I loved him. He was capable of great empathy and had a real sense of justice.”

Vocalist Randy Blythe of fellow Richmond, Virginia metallers LAMB OF GOD, who toured with GWAR in 2009, wrote on Instagram: “I got a very sad call tonight from my buddy Chris Bopst, who was one of the original members of GWAR. My friend Dave Brockie, a.k.a. Oderus Urungus, the singer of GWAR, has left the building and taken off back to his home planet. He was 50 years old.

“I do not know details of why he died yet, just that he passed away at home and his roommates found him.

“When someone dies, a lot of the time people will say, ‘Oh, he was a unique person, really one of a kind, a true original.’ Most of these people no idea of what they are talking about; they obviously had never met Dave.

“Dave TRULY WAS ONE OF A KIND. I can’t think of ANYONE even remotely like him. That’s VERY HARD TO SAY.

“My band learned how to become a real touring band from GWAR. They gave us out first shot at this thing.

“I took this picture at his birthday party a few months ago — Dave kissing his Oderus birthday cake.

“Right now, if I were to truly honor Dave in the way HE would do it if it were ME that had died, I would make a completely tasteless joke about his death. But I do not have the stomach for that — Dave would, but not me. He never put much stock in ‘limits.’

“Richmond has lost one of its most creative people.

“This is a crying shame to me.

“Thank you, Brockie, for all the crazy shit you did. Thank God you existed, so you could do it and I didn’t have to. It was an honor to know you, to be your Shaky Slave, to serve in the Blood Vomits along side you (let’s ride!), and to be soaked by your sweet cuttlefish.

Bassist Chris Kael of FIVE FINGER DEATH PUNCH said: “Just read about the passing of Dave Brockie — Oderus Urungus from GWAR. We had the privilege of playing with GWAR just one month ago at Soundwave festival in Australia. Dave was always right there on the side of the stage that FIVE FINGER DEATH PUNCH were playing on — watching every band, laughing and enjoying life. As he entertained us in life, may his death remind us that life is short. Tell the ones around you that they are loved. Live life with a smile and a laugh. Just as Dave and I shared a laugh while talking at Soundwave. We love you. Each and every one of you. R.I.P. Dave Brockie — Oderus Urungus.”

Vocalist Tony Foresta of another Richmond, Virginia band, MUNICIPAL WASTE, which toured with GWAR in 2012, wrote on Instagram: “I’m so devastated right now. One of the most fun, brilliant, inspirational and creative people I’ve ever had the privilege to call a friend has passed. I’m going to miss you so much, pal.”

EMMURE: “We are deeply saddened by the news of our fellow comrade passing away. Dave was a admired individual amongst us. He spoke highly of EMMURE and whether he knew it or not, we were very passionate about him as well. R.I.P., Oderus Urungus. GWAR FOREVER.”

Ben Orum (ex-ALL SHALL PERISH): “Dave, You were a creative genius. Thank you for bringing so much joy to me and my friends as we grew up with GWAR. RIP.”

According to Australia’s TheMusic.com.au, GWAR’s management will issue a statement regarding reports of Brockie’s passing at approximately 1:00 p.m. EST today.

Brockie is not the first member of GWAR to die at an early age. GWAR guitarist Cory Smoot, who played the character of Flattus Maximus for over ten years, was discovered dead on the band’s tour bus on November 3, 2011. He was 34 years old.

In a January 2012 interview with Full Metal Jackie, Brockie stated about Smoot’s passing: “I think Cory’s death is a big wake-up call for all of us. We all breathed a big sigh of relief when we found out it wasn’t a drug overdose, to speak quite frankly. But then to think that he was 34 and died of a heart attack — it’s really scary.”

He continued: “Everybody out there needs to take care of themselves, especially you guys who are playing in bands and starting to get up into your 40s and you’re all sitting there just like me saying, ‘Holy shit, this is still going on and I can keep doing this probably for the rest of my life?’ Yeah, you can, but you have to take of yourself. You really, really, really, really do. So I’m trying to quit smoking right now.”

GWAR’s latest album, “Battle Maximus”, sold around 3,500 copies in the United States in its first week of release to debut at position No. 109 on The Billboard 200 chart. The CD — the band’s first full-length studio effort since the loss of Flattus Maximus — was issued on September 17, 2013 on Metal Blade Records.

What Are The Chances Of MÖTLEY CRÜE’s ‘The Stadium’ Tour Happening...

Poleto - February 26, 2021
That Thin Lizzy are such an iconic and legendary band we all know it. However, I've never had the opportunity of reviewing a band...

Poleto - February 26, 2021
One album, ten tracks and many Metal music conventions broken. This week we've reviewed three Extreme Metal albums in a role. It was a great...

Poleto - February 25, 2021
My dear and beloved child of the night may think sometimes I'm a bit redundant because there are things that I keep on writing...

Poleto - February 25, 2021
At first the fan may think it's a Raw Black Metal band due to unstoppable and resilient pounding of the drums and the acid...

Blitzkrieg – A Time of Changes Review

Poleto - February 23, 2021
Blitzkrieg are a band with a history and as you know, my child of the night, I love bands with history. This album "A...
© Metal Addicts 2021. All rights reserved.